Twenty-five hikers had a great time hiking in Manning Park, and staying at the historic Last Resort Lodge. 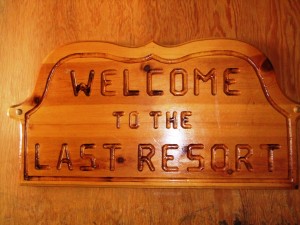 The 3 short days of our hiking retreat were filled with good fun, good food, laughter, relaxation and several wonderful hikes as well.

The Happy Hiker Chicks are pictured below. 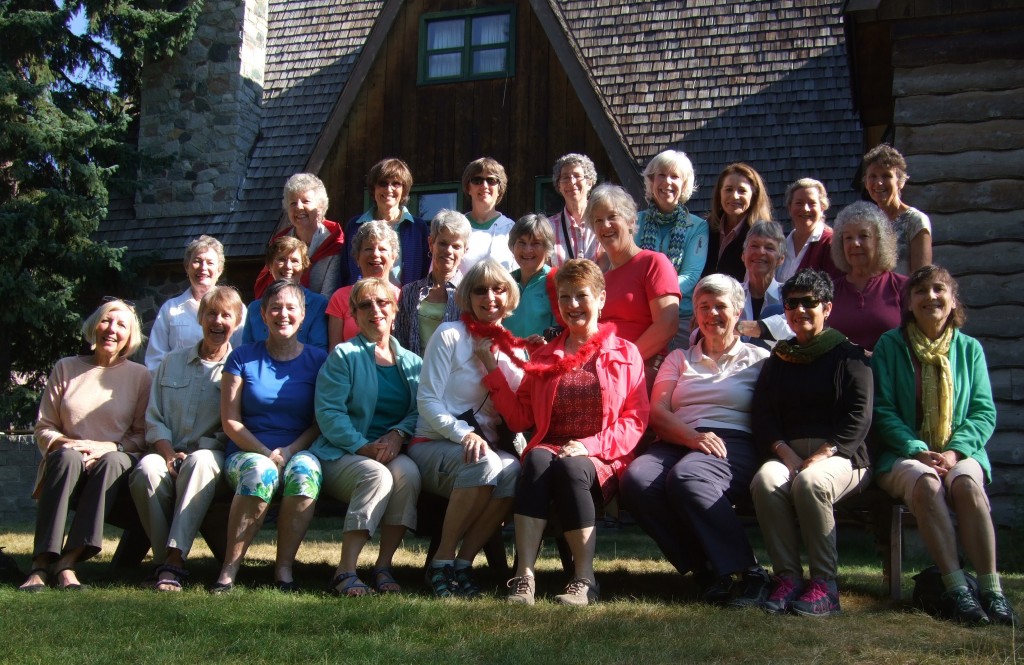 You may view retreat pictures on this amateur You Tube Video –>  here .

Click on the frame below to view the slide show. This may or may not work on your iPad or iPhone.. sorry, but this is what you get with a volunteer, amateur webmaster:)

Our retreat adventure got started mid-day on Monday when we all gathered for lunch on the sunny grounds of the Manning Park Resort.  We followed up with an easy walk around the Canyon Nature Trail loop and then checked out the facilities at Lightning Lake while our accommodations were being readied. We stayed in The Last Resort – a small lodge-type building with plenty of beds and a large kitchen/living area which was perfect for a large group like ours. The gang of 25 was all checked in and ready for a social hour later in the afternoon. 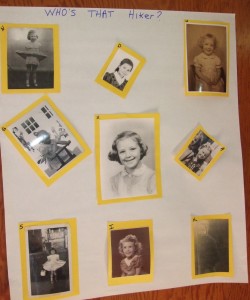 Hikers had submitted a photograph of themselves taken in their younger years – mostly before the age of five. The photo exhibit provided us with a fine mixer activity which we called “Who’s That Hiker?”.  Elaine Cress collected and mounted the photographs for the group and while she thought some hikers would be easily identified, most of the group were very challenged when it came to matching names with the youthful faces.

We learned more about one another when each hiker shared some memories of her life at the time of the photograph.   During this time as well, we shared some poignant memories of those friends who were not able to be with us.

After a bountiful breakfast in the Pinewood dining hall, we formed our carpools for a short drive up the mountain to the Cascade Lookout overlook where we could see many peaks on both sides of the border. From that point, we continued to the Heather Trailhead for our day’s hike. Some hikers took a short loop, returning to the Manning Resort to investigate many of the activity options, others hiked out for a couple of hours then back, and still others were destined to go further.  Mountain-scapes and flowers and good company were plentiful along the well-maintained trails. There was no sneaking up on wildlife since laughter and chatter often preceded preceeded us,  but we did see some ground squirrels, Gray Jays, and Clark’s Nutcrackers. 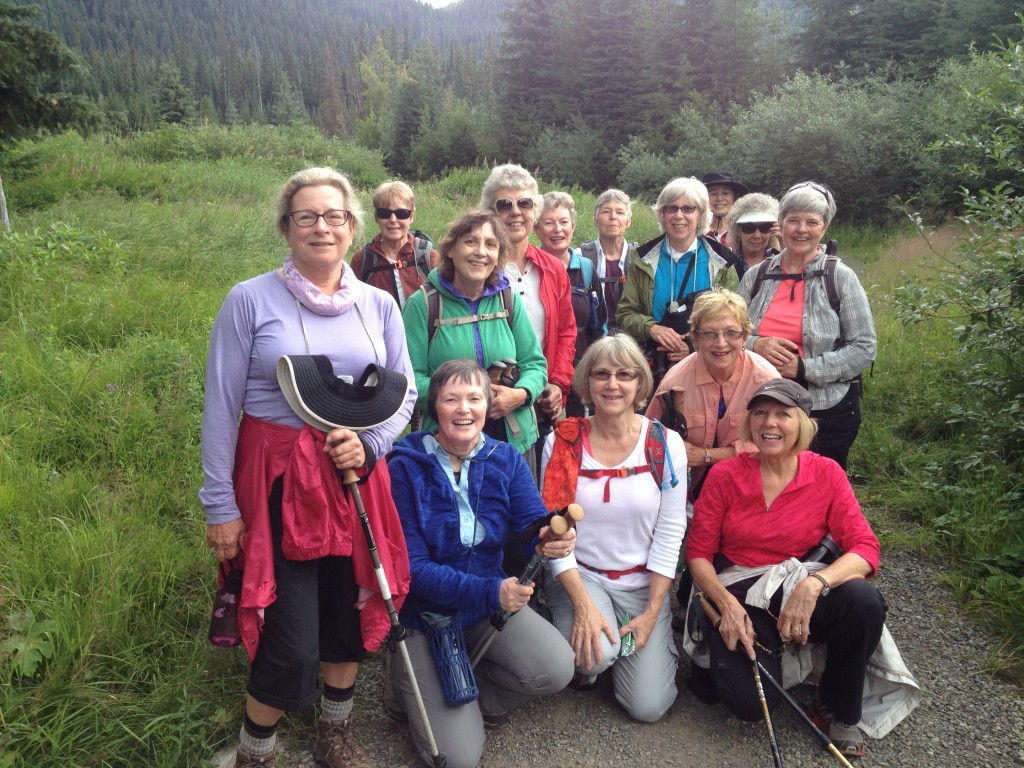 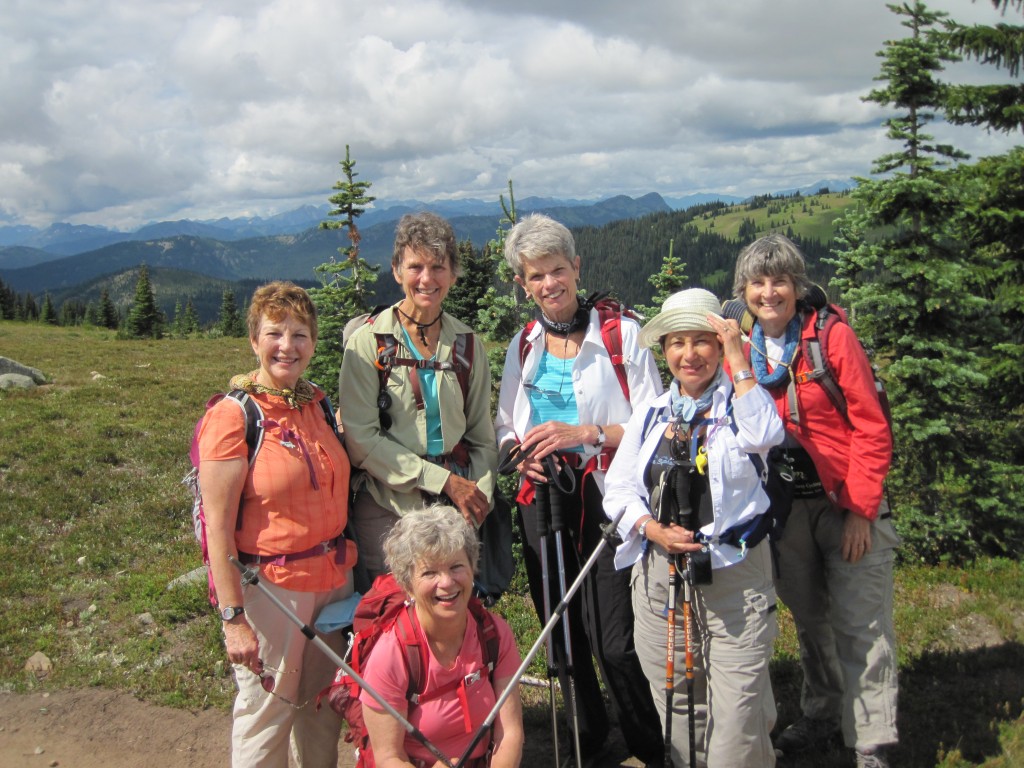 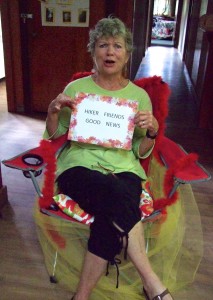 Several hikers took their turns sitting in the chair to share their good news of the day.

After dinner the main room was converted to a little casino with two game tables going for Farkle and Mexican Dominos. No money was won or lost, but much fun and laughter was had by all.

Hiker Chicks split into two groups for hikes on Wednesday.  One group took a 5.5 mile trip around Lightening Lake. This consisted of following the lakeside path up and down hills with beautiful lake and forest views along the way.  Trails were not always well-marked which resulted in a duck and scramble strategy to challenge our flexibility. We crossed the elegant Rainbow Bridge and watched kayakers pass below us.  The wind had picked up by the time we returned to the boat dock, so we left paddling for another time. We had a relaxed lunch beside the lake and then chose our own activities – some taking advantage of the beautiful indoor pool and hot tub at the resort. 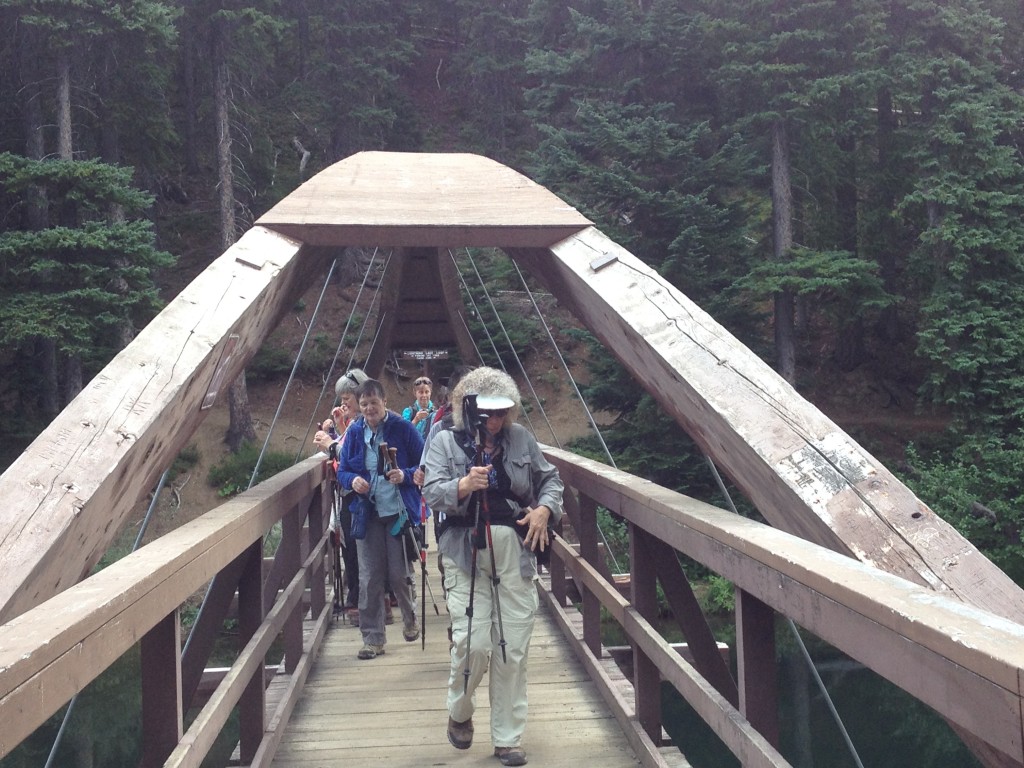 Annette and Elaine led a second group of hikers on a longer trek that was aptly described as ‘challenging’.  This point-to-point hike started at Strawberry Flats and continued up the Skyline Trail ending at Spruce Bay.  After a steady but reasonable ascent, all were appreciating fabulous views of Red Mountain from the ridge. After lunch the hike continued along the ridge to reveal more and more views from more and more ridges…which meant more and more treks down and back up again. 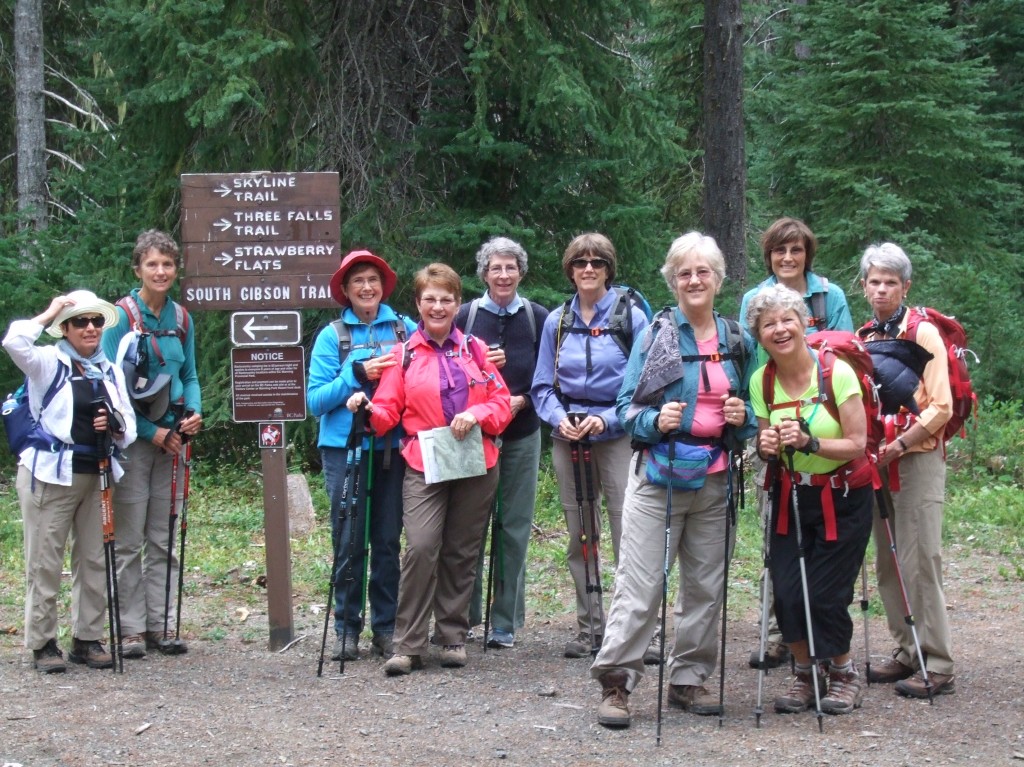 Hiker Chicks set out on the Skyline Trail

The group naturally split into the their comfortable paces: the 4 jack-rabbits, with Elaine and Annette perfecting a “lead-from-the-middle” technique and Judith Akins, the sweep, with 3 stalwart slower hikers.  The last 2-3 miles down to illusive Lightening Lake seemed to drag on and on and on.  Once down, the middle and later groups were grateful to find friends waiting for them and (better yet! ) grateful that the last jaunt to the parking lot was shorter than expected. Having a car to ride back to the starting point of our hike was a welcome sight indeed! 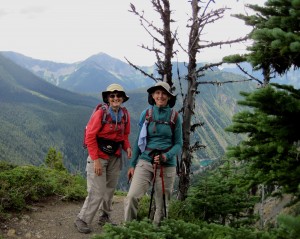 Annette & Judith at a windy point above our spectacular lunch stop.

As it should be, the Skyline hikers returned to the lodge to find well-hydrated, welcoming Hiker Chicks enjoying happy hour.  Triumphant hikers had to decide between showers or drinks as dinner awaited and all was well. 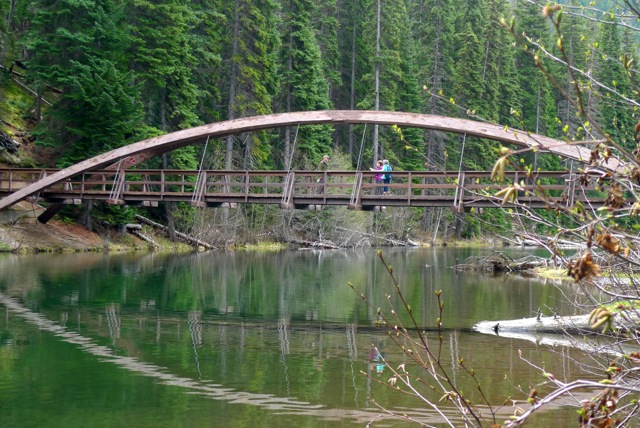 Hikers were sad to see our time together coming to an end, grateful for the hot-tub and pool after long days, the variety and beauty of the hikes, the food at the lodge what was good and plentiful and the accommodating staff.  We won’t forget the hungry and rather bold mice in the lodge that added to the rustic appeal of the Last Resort.  They needed that trail mix more than we did! 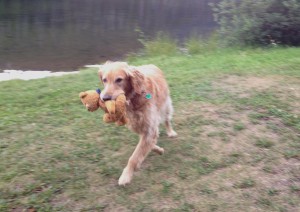 Single bear siting of our retreat – this stuffed one carried by a Ruby look-alike.

We posed for some group pictures in front of the Last Resort, packed up, and headed home with some taking advantage of the Sumallo Grove old growth forest in Skagit Provincial Park, just west of Manning Park on the Canadian Crow’s Nest (Highway 3). 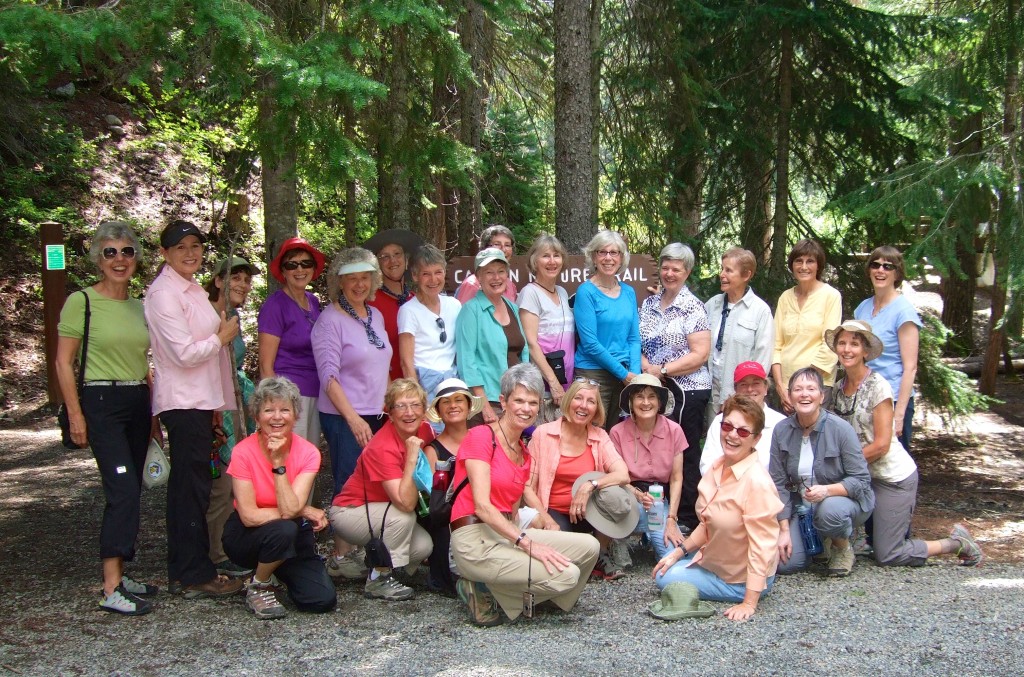